The ion chromatograph is offered in two different detection variants with regard to different applications. As standard, this is detection by conductivity (IONUS) and for special applications this detector is replaced by post-column derivatization with photometers of different wavelengths in the UV/VIS range (IONUS Post Column Derivatization) in analogy to our amino acid analyzer ARACUS.

By default, we equip our chromatographs almost exclusively with columns from Hamilton in Stainless Steel or PEEK. Columns from other manufacturers are available for certain special applications and on request. We also develop individual applications for you, which are specially tailored to your wishes and your separation problem.

This IONUS is suitable for the analysis of anions and cations in research, development and everyday routine. The sample solutions are mostly water-based and may contain water-miscible organic solvents. A classic example is the analysis of (drinking) water according to EPA 300 Part A and B.

The advantage of IONUS is the compatibility with IC columns of all manufacturers and is compatible with all common eluents of anion and cation chromatography. In order to measure smaller concentration ranges in anion analysis, the instrument can be equipped with suppressor technology.

When applying without suppressor technique, it can happen that in the chromatogram there are negative as well as positive peaks for the individual substances or that the peak areas are very small due to very small conductivity differences. In this case the external UV/VIS detector can provide a remedy by using indirect UV detection for light-absorbing eluents. Another possibility is to use non-absorbent eluents for light-absorbing sample substances.

This generally more complex detection technique is used if the detection by means of conductivity provides only very small peaks, so that the sensitivity is quite low or this optical detection is much more sensitive. This can reduce the detection limit by orders of magnitude, as for example with bromate to less than 1 ppb.

This IONUS Post Column Derivatization (PCD) does not have a built-in conductivity detector. Instead, it has a reactor for derivatization followed by a single wavelength photometer. Different wavelengths are required for these special applications and used colour reactions. These single wavelength photometers are very sensitive compared to a variable UV/VIS detector, and it can be easily changed by the user. The choice of wavelength depends on the selected colour reaction, such as for the two bromate determinations according to EPA 317 or 326 with 440 nm or 355 nm.

This IONUS PCD also offers the advantage that it can be used with IC columns of all manufacturers and is compatible with all common eluents of anion and cation chromatography. 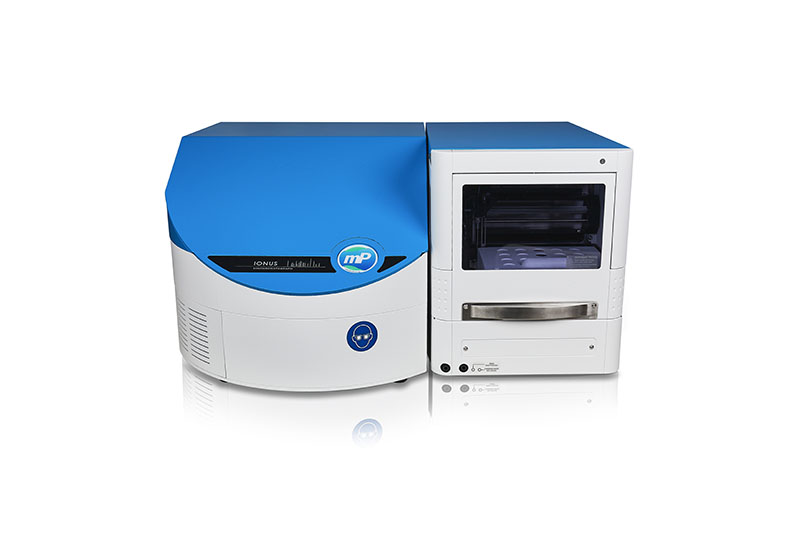 Anions and cations can be measured subsequently with conductivity detector. If requested the IONUS can be equipped with UV/VIS detector for indirect detection.

The IONUS is compatible with the common eluents and columns (max. operating pressure 120 bar) for anion and cation exchange chromatography. The customer is not limited to one brand.

columns: the IONUS works with the common columns (stainless steel/PEEK) with max. operating pressure of 120 bar.

eluents: because IONUS works with the common eluents based on carbonate/bicarbonate buffers, nitric acid, sulufirc acid, the customer is not bound to a specific product.

based on chemical process regeneration of suppressors with acid.

by using carboxylic acids (oxalic, tartaric, citric acid) as eluents and the complexing agent (PAR) 4-(2-Pyridylazo)resorcin the concentration levels of transition metals can be determined.

the IONUS can be equipped with an additional UV/VIS detector.

the bromate analyzer is a dedicated configuration for the analysis of bromate in water based samples with a detection limit of 1 ppb. Depending on what is requested, the derivatization can be performed with Dianisidine (EPA 317) or Triiodide (EPA 326) together with a UV/VIS detector.

For further informations please check the brochure or CONTACT US!